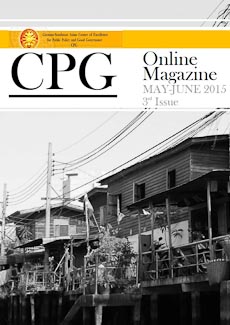 HE. Son Soubert, Faculty of Archaeology of the Royal University of Fine Arts

The results of these legislative elections were rigged with frauds, and outright objected by the opposition party or the Cambodian National Rescue Party (CNRP), by independent observers and NGOs.

The CNRP resorted to the legal procedure, by lodging complaints to the Constitutional Council which in this occasion acts as  a  court.  They asked for the recounting of the ballot papers in two constituencies they believed incorrectly counted and eventually the organization of new elections in these constituencies. In one of the constituencies, the Constitutional Council failed to organize the new elections, although they knew the whole process was not correctly respected, arguing a lack of time which was stipulated in the Constitution according to which 60 days after the elections, the National Assembly should proceed to its opening. The ballot papers from the other Constituency, that is Kratie province, were not convincingly recounted by the Constitutional Council’s Member in charge of the problem. Despite all of that, the Constitutional Council proceeded to the proclamation of the final results of the elections. Failing to have satisfaction on their legitimate demands the CNRP decided to boycott the Opening Ceremony of the National Assembly, in order to response to its supporters advising the party not to attend. The CNRP created thus a crisis without precedent: mass demonstrations succeeded one another for months.

Since no progress for any solution was in view, I therefore wrote to His Majesty the King as His Privy Councillor by quoting the Articles 8 and 9 of the Constitution, according to which the King is the symbol of national unity and the State continuity, and is the guarantor of national independence, sovereignty and territorial integrity (Article 8), and exercises the role of an arbitrator in order to guarantee the good functioning of the public powers (Article 9). As such, He can convene again the two parties in front of Him and asked them to come to an agreement for a political solution. Failing that, I took the liberty to suggest three solutions:

The Prime Minister was not happy with my suggestions: without naming me explicitly, he publicly criticized some person who made such suggestions.

I don’t know whether this intervention has any leverage on the change that came shortly after that. Both the opposition and the ruling parties came to some understanding on the composition of the 9 members of the National Electoral Committee (NEC), by agreeing with the formula of 4 members from each political party and a neutral figure from the NGO .

I still don’t feel that this compromise would lead really to the neutralization of the whole process, if on the commune and provincial levels the composition would lean toward the ruling CPP. Again it would not be enough to neutralize the NEC, the Constitutional Council which in the last resort decides on the outcome of the results of the elections has to be neutralized also.

In the precarious situation of Cambodia, where the Armed Forces are involved in fishy businesses, if not land grabbing, with an inflation of generals (over 900), some without troops and harshly educated in the democratic ideal, the democratization process will be difficult, in terms of rule of law and democratic governance. This kind of situation is the result of the ill-implementation of the UNTAC (UN Transitional Authorities in Cambodia) which did not succeed to canton, disarm and demobilize the four factions’ armed forces in 1992, prior to the UN organized elections. Finally the armed forces ended up to be the instruments of the Prime Minister who tolerates their fishy businesses, either incapable of controlling them or unwilling to do so by a laisser-faire in order to have them depending on his good will, because they are somehow linked with criminal activities. Even though the King is the President of the Supreme Council of the National Defense, He has no power on the Military. The present Armed forces are barely National Armed Forces, but rather the ruling party Armed Forces.

The  Constitution  stipulates  that  the  King  is  the  guarant or  of  the independence of the judiciary. Although the King is the President of the Supreme Council of the Magistracy which supervises the functioning of the judiciary system and the behavior of the judges, He has no power to make His points of view known. The judiciary system is still weak and fearful of the executive power, if it is not liable to corruption. His Majesty King Sihanouk told us in 1997, when the Members of the Permanent Committee of the National Assembly visited Him in the Royal Residence of Siem-Reap, that He would never preside over the Supreme Council of Magistracy, because He did not know the judges, hearing nothing  about them, and could say or see anything, by putting His hands in front of His mouth, of His eyes and before His ears.

(….) On the occasion of the passing away of Lee Kuan Yew, the founder and long-term leader of Singapore, we present in our rubric “Asian leaders” an article of Michael Barr, PhD, Associate Professor in International Relations at the School of International Studies of Flinders University, Australia. Author of “Lee Kuan Yew: The Beliefs Behind the Man”, Michael Barr presents in this paper conclusions on life and legacies of Lee Kuan Yew on whom he has been doing research for 20 years.